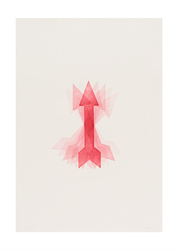 Many years ago a close friend loaned me an old tin red-arrow sign that used to hang in a theatre where we had both worked. For me that sign symbolized an idealized sense of connection. It stood for the freedom that comes from leaping into the unknown in front of a crowd of strangers and represented the exhilarating rush of trepidation and possibility that accompanies an actor’s path from the wings onto the stage. I had that tin arrow in my office for many years until I had to give it back, and not long after I let it go I found arrows showing up in my work. Since then I have explored the idea of the arrow and what it symbolizes for me in many different forms.
Arrows are much more than a symbol; they are a metaphor for being. In my work the arrow is a representation of the human figure, an expression of movement, time or state of being, a meditation on direction, impulse or legacy, and as a collective, an illustration of the journey or state of humankind.
I’ve explored the arrow in many different ways in my work, but I have always been inspired by that first arrow. It has been my talisman each step of the way.